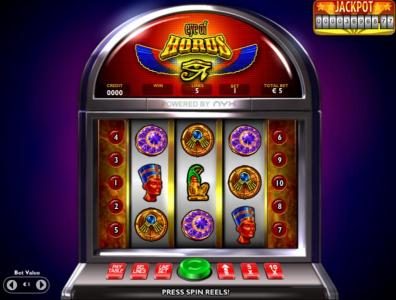 Rating:
Eye of Horus slots is a progressive online slot game that magically transports players into the ancient Egyptian age. Tombs, pyramids and gods were the norms during this golden era. It was an age that is often romanticised in movies, books and plays. From the Nile River to Cleopatra, Egypt is remembered differently than any other ancient age environment. Eye of Horus slots captures the essence of the time frame brilliantly by representing the era with picturesque symbols.
Players of this slot will feel the amazing energy of a time when Gods were admired without question. Gods, much like Horus, were seemingly unrivalled in passion and pride for the people of Egypt. It was an era when people looked up to the Gods and prayed for good fortune. This slot experience is perfect for those wishing to reap great riches from the Eye of Horus. 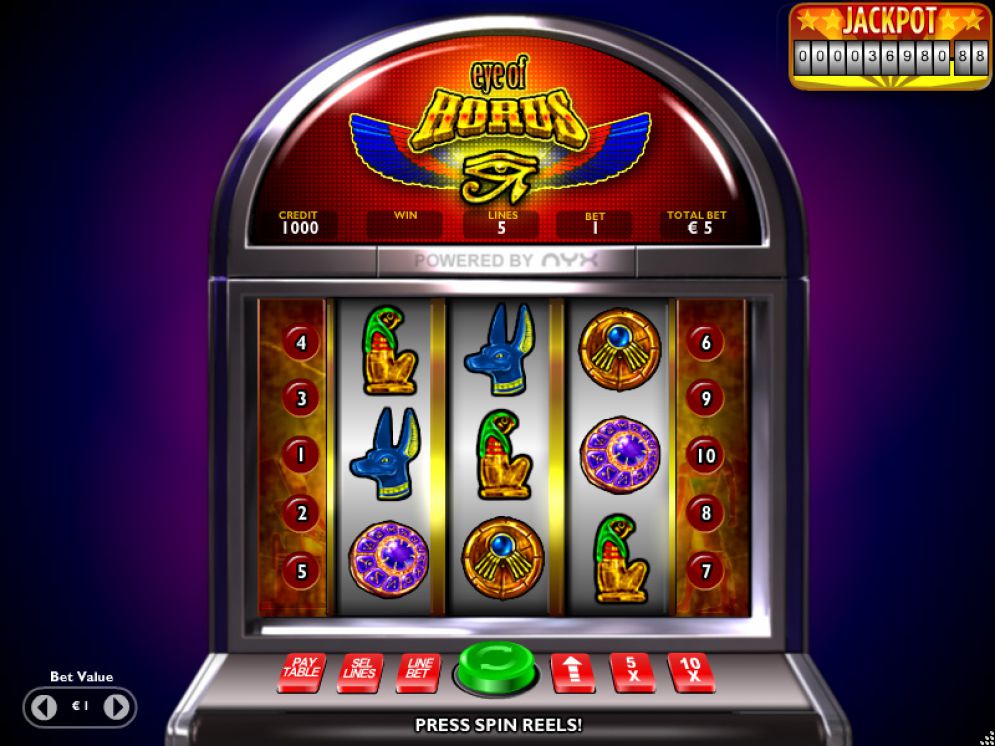 The Eye of Horus was a symbol of great protection in ancient Egypt. Horus was a sky god whose eyes were often referred to as the eyes of the sun and moon. As you will see, there is an abundance of energy in this hidden jewel slot game. From the music to the visuals, Eye of Horus is an online slot that will transport you to another period. The essence of the game certainly belongs to Horus. It is he who shines when he fills the screen with his energy on a remarkable win. However, the game is much more than just his brilliant gaze and unmatched radiance. There are much more symbols, prizes and ways to collect from the ancient Egyptian age.

Horus was typically represented as a god in the form of a falcon. In this online slot, the Horus symbol is characterised by an illustrious eye that radiates energy. Nabbing several Eyes on the same pay reel will provide any person attempting the slot further enticement to keep playing. The winnings could be spectacular depending on the wager.
There are five reels and ten pay lines in this online Egyptian classical slot. Players win big if they can land several of the Eye of Horus symbols on the same reel. It could pay handsomely depending on your wager. It can also pay well depending on how many reels consist of the Eyes. If the Eye of Horus is shining upon you, perhaps you will do both.

Participants may also land three golden gate symbols for the bonus feature. It’s a feature that often lands a high number of coveted free spins and even more winnings. Often the bonus feature leads to even more free spins and more prizes. Unlike other features, the golden gate certainly adds much value to the Eye of Horus with many possible re-triggers. This just further captivates players who love more opportunities to win without having to wager again.
Reels also are often filled with playing cards like Aces, Kings and Queens. Depending on how many cards one lands per reel, the payoffs can be good. Coupled with a wild, the winnings can start to add up.
However, the reels also consist of many Egyptian artefacts. Beetles and jackals are also part of the fantastic imagery provided. Those ancient artefacts also supply the player with more winnings if they collect three or more per pay reel.
Ultimately, Eye of Horus provides the participant with an incredible gaming experience starts to finish.
Players who dare attempt to test the Egyptian rule could benefit from the free spins, large payouts and huge winnings. Eye of Horus slots is a dynamic slot filled with many possibilities for those wishing to challenge the ancient Egyptian culture.