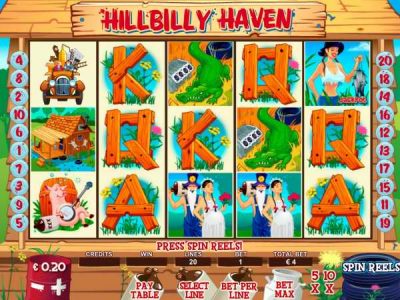 Rating:
The Hillbilly Haven online video slot game by NYX is a colourful little game that was released in 2010. This casino slot has all of the pictures that game with this theme could fit into it. The audio sounds and voices also fit into the theme of the hillbilly world perfectly and only add to the fun of the game.

Wagering on this game starts with a minimum of .05 credits up to a maximum amount of 50 credits per line. This massive slot game includes five different reels and 20 different pay lines for players to bet on. The more lines that player bets on, the higher the payout in wins will be for that round.

To get free spins while playing the Hillbilly Haven Slot game the player needs to have 3 or more symbols of the old, filled junker car land on an active pay line. These spins can be re-triggered, which means that while the spins are taking place more could be won. 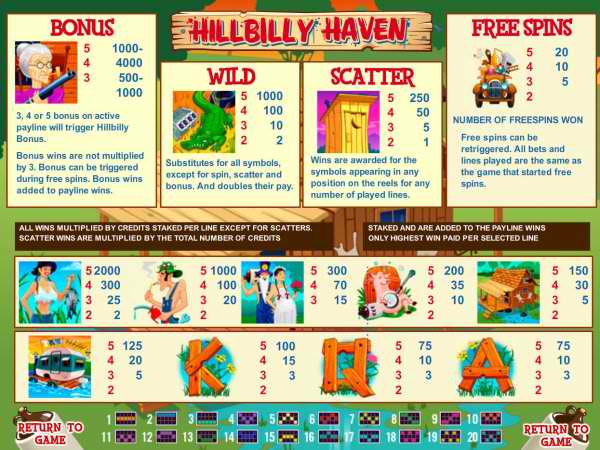 There are a few different scatter symbols to add to the fun of this quirky casino game. Three different symbols represent the hillbillies in the game, and they are all scattered. If a player lands 2 or more of the hillbillies on pay lines, it adds up to some cash. This spin of two or more scatters will also trigger the featured bonus game which automatically gives the player eight free spins.

After the player triggers the featured bonus round through 2 or more scatter symbols the screen changes to display the hillbilly house with jugs in the yard. Players will pick the jugs to reveal a prize.

The wild symbol for the Hillbilly Haven Slot game is the picture of a crocodile. This prehistoric beast will take the place of all other symbols except the special ones. This symbol also doubles the win for the amount bet for the round.

Other fun symbols that make an appearance in this game include the rustic hillbilly home, a fiddle playing pig, the pregnant hillbilly bride along with her new whisky-toting husband, and the fishing hillbilly gal. There is also a symbol of the hillbilly mechanic who is pumping gas and lighting a cigarette at the same time. The hillbilly floating camper is another symbol in the game, and so are the K, Q, and A. A spin where any of these symbols land with 3 or more across pay lines could mean some cash for the player. The fishing hillbilly gal and the cigarette smoking hillbilly mechanic are the highest paying random symbols.

The Hillbilly Haven Slot game has a few featured buttons that add to the fun of the game. To keep the confusion of which symbol means what during game play a player can choose the help button. The help feature will also lay out the game rules and any featured round information for the player. Auto play is another nice feature for the Hillbilly Have Slot game. This featured button comes with options that the player may choose to stop the auto play function. They could choose for the auto play to stop when a certain amount of cash is lost in games, or when a win is hit on a game.

The Hillbilly Haven Slot game, unfortunately, is not part of the progressive jackpot network, but with the many ways that a player can win it is not a huge loss. In fact, players who are lucky could win the massive jackpot for this game which is set at 40,000 coins. The graphics and audio for this slot make it a hoot and is sure to be a casino fan favourite.