Rating:
Having fun with Jurassic Park Slot
For those that have been waiting for a slot game based off of the 1993 movie Jurassic Park, the wait is over. The Jurassic Park Slot has 243 pay-lines and five reels, giving the player a lot of opportunities to win. This video slot game is powered by the software of Microgaming. Spielberg would sure be happy about this game, with the amazing looking environment and the reels that are put up against the jungle background which slowly scrolls. Interested in this new game? It can be found at any number of Microgaming Casinos where players can play using real money in real time. 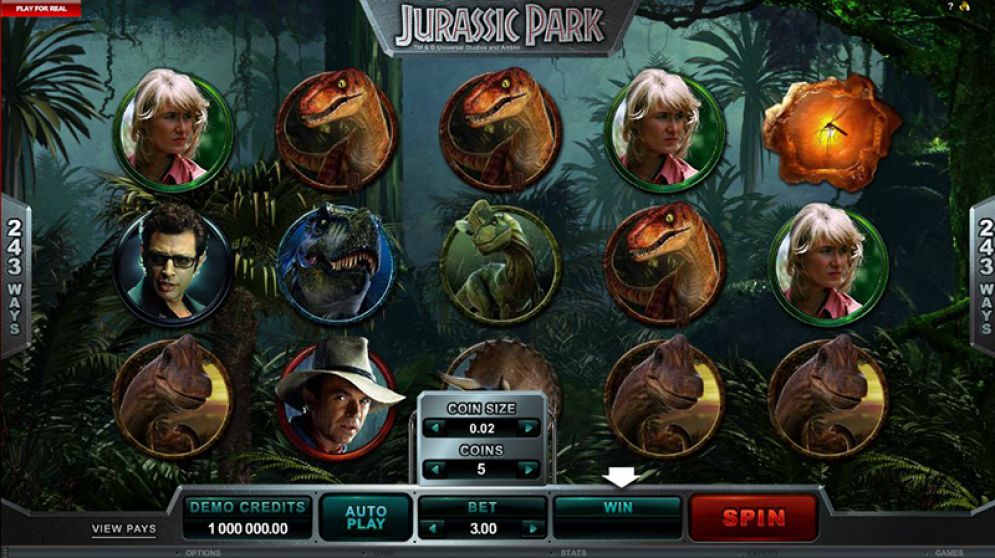 Before a player can begin to confront the dinosaurs created using genetics, they should start off by setting their bets. The player can easily click on the bet button which will produce a drop down menu that will automatically open showing the player their options for coins and sizes of coins. If the player clicks on the coin size, the player will be presented with coin denominations that start at 0.01 and go to 0.05. Then, if the player clicks on coins, they will be presented with the ability to set the number of coins they want to bet per line. By clicking on the spin button, the player will put the reels into action. The player also has the option of clicking on the expert mode button, which will allow them to see the autoplay option. The autoplay option can be used to make the reels spin without any interruptions for some times that is set by the player.

Of course, there is an alert mode which happens every time a T-Rex symbol happens to land on the reels. If this happens to a player, then over the next six spins they will notice that there are 35 wilds which happen on the reels. However, this is only able to happen in the base game. If a player is lucky enough to hit 3 or more of the scatter symbols, they will activate the free spins, and there are a total of 5 different spins which a player will find that this game has to offer. Players will come to realise that during the beginning one of the five spins will randomly be selected by a program, however, after a player has activated 25 of the spins that are free, they will be able to pick a feature that they want. Every set of spins will automatically start with a total of 12 spins that are free.

Players will probably notice that the Tyrannosaurus Rex comes equipped with a Wild Reels bonus feature that allows stacks of wilds to show up on all of the reels. If the T-Rex symbol does show up, then the player is automatically guaranteed a win in the game. The velociraptor equals out to a multiplier and split wilds for the player. The split wilds can be split in 2 if the player has a win available to them. This can equal out to 6 different wins for a player. If the player gets the multiplier wild, it will give them a random multiplier; this can be a random pick of x5, x4 or x6.

If the player is lucky, they might happen across the Brachiosaurus feature, which has the mystery multiplier. This equals out to the player getting a multiplier for their wins every spin. For this feature, the multipliers can be between x2 and x6 for the player’s win. The Triceratops comes equipped with running wilds. This equates to the first stack starting with three symbols in total and also means that there will be one more added with every spin that the player makes. If a player gets a partial stack, they will be awarded a re-spin that is free; this can end up in the player getting a full stack which also awards the player with a free re-spin. The Dilophosaurus comes equipped with winning wilds, which can show up and split a symbol and make it a wild. This wild will stay a wild until the time that it wins.