Rating:
The Napoleon Boney Parts Slot is a fun little slot with some very cute animations that occur during game play. The theme of this casino game is that of Napoleon in skeleton form. Players have the ability to bet on 25 different pay lines that cross over five reels. It includes bonus rounds, scatters, free spins, wilds, and more ways for a player to win.

The scatter symbol, which is the crest with the famous skeletons head appearing in the centre of it will give the player free spins. When a player wins ten free games, they will find all prizes are doubled for those spins.

The picture depicting the face of Napoleon Boney Parts is the wild symbol for the game. When he appears on a line that has been bet on the animation will have the skeleton show up in full body length. When this symbol appears on reels 2, 3, and four the games, Boney Parts feature will begin. During the feature game, the player will pick Napoleon’s bones apart to win prizes. They do this by clicking on different bones in hopes a prize is behind it. Players may pick three bones in this feature. When Napoleon Boney Parts falls to the ground, the player will find they have a Big Win, and the bonus round is over. 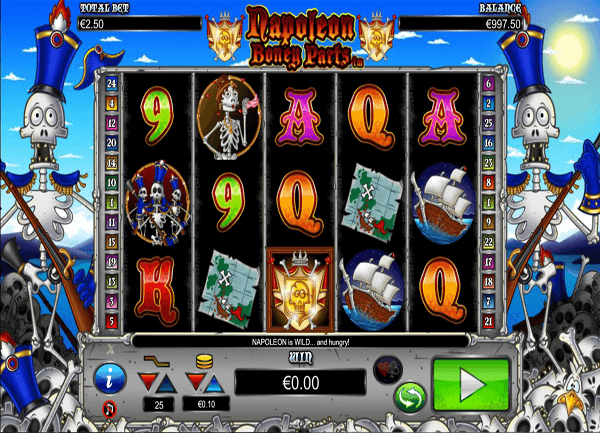 The Napoleon Boney Parts Slot has other symbols appearing in the game that revolves around the theme of the game. A lady skeleton waving her pink handkerchief appears in the random symbols as does Boney Parts big ship. A squad of skeleton fighters and a treasure map are also included in the random symbols. The Napoleon Boney Parts Slot has the A, K, Q, J, 10, and even the nine symbols that appear in many slot games. The highest paying random symbol is the female skeleton symbol. If players spin 2 or more of this symbol, they could win up to 5000 for that round. The

The colourful Napoleon Boney Parts Slot casino game has different buttons on it than other slots may have. At the bottom of the game screen, the player will find all of the useful buttons they will need. On the left bottom side of the screen is the I button, which will open up the information necessary for the game. Here players will find all of the ways that they may win while playing. Next to that button players will be able to adjust the lines that they bet on as well as the amount they would like to bet on each line. In the centre bottom of the screen displays the amount won during a round. To the right of that players will see a button with the heart and club symbols on it. When players click this button, a new screen pops up where they have the ability to bet on red or black. This little game is a guessing game to see if they guess correctly on the card that loads in the centre. If they win, they can cash out of that game or keep betting. Under that button, players will find the Auto Play function. After pressing on this button, which looks like arrows, players can adjust the sliding scale to some spins they would like the game to spin for them.

The Napoleon Boney Parts Slot is a fun animated casino game that allows players to win big with 25 different betting lines. This many lines also means that betting on each one could lead to betting significant amounts of cash for one spin. It is part of the progressive jackpot network of games so players could potentially win large sums of cash.