Rating:
Jimi Hendrix Slots: The Wind Whispered Winning
Jimi Hendrix is an online slot game based on the late, great iconic singer-songwriter and guitarist. Developed by Net Entertainment the psychedelic-themed game features five reels, 20 pay lines and a soundtrack complete with Hendrix hits such as “Purple Haze” and “Foxy Lady.”

Graphics
The graphics evoke historic moments such as the flower power era and Woodstock. The game has a psychedelic vibe that permeates it even though the graphics themselves are somewhat basic. The backdrop is a dreamlike view of a desert, and the game is coloured in pastels.
The game’s graphics also include some different theme-related symbols such as a vinyl record, a heart, a peace symbol, a flower, an eye and a white guitar. The lower values of A, K, Q, J and 10 are also in a contemporary yet vaguely funky font. Jimi Hendrix himself is used as the “wild” symbol. His image can substitute for any other image other than the different scatters which include the Jimi and white guitar, red guitar and “Purple Haze.” 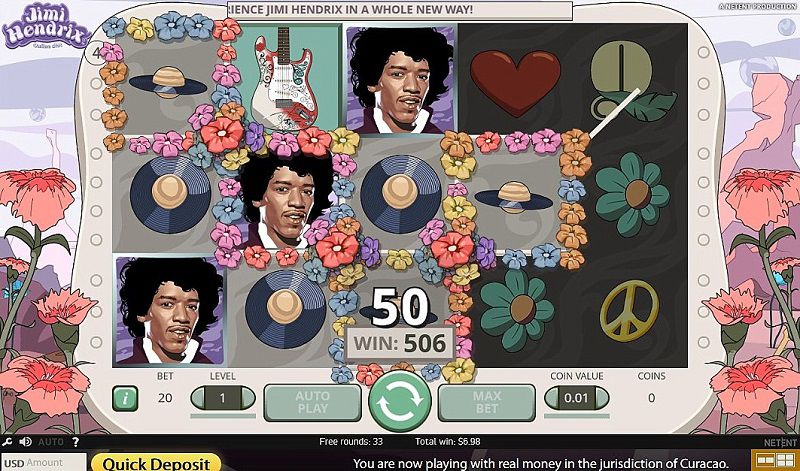 Basic Gameplay Information
The basic game play information is simple and no doubt familiar to those who have played similar slot games. Players set the denominations for “coin value.” They can also set the maximum bet. Additionally, they set the “level” or the total number of coins per each line. The game’s auto play function spins the reels without any interruption for a specific number of times, and of course, the spin function starts the game.

Pick and Click
Pick and Click is set off when a player’s spin lands results in a trio of Jimi/white guitar scatter symbols anywhere on reel numbers three through five inclusively. The user then gets to play a picking game until he has found a trio of corresponding symbols which will award the player one of four different features:

Coin Win
Coin Win results in the player receiving a specific multiplier of his or her total bet somewhere between eight and 30 inclusive.

“Crosstown Traffic” Free Spins
The player is awarded a total of six spins. One or two completely wild reels come up on different reels on each spin.

“Purple Haze” Free Spins
This includes between six to twelve spins being awarded. Each A, K, Q, J and 10 are wild cards here.

“Little Wing” Free Spins
Here the user receives six to twelve spins with between three to five wild cards added to each of the reels on each spin.

These features are also included:

The “Purple Haze” Feature
This feature is triggered by the Purple Haze symbol popping up any place on the first reel where on reel one. The symbol turns wild along with 10, J, Q, K and A and the payout is then evaluated.

Summary
This game has a medium variance. Most wins hit during the base game. The “Purple Haze” Spins can be the most rewarding since players can receive as many as five wilds on each free spin. Overall, the Jimi Hendrix slots game may initially appear to have a somewhat basic look, and yet the design and the soundtrack are interestingly apropos. The gameplay is smooth, and there is also an ample variety of noteworthy bonus features too.